The processing units that make up a proc.

A nickname for the entire queuing system, which also prefixes the names of OpenCue rendering tools, such as CueGUI and Cuebot.

CueAdmin is the OpenCue command-line client. You run this client to administer an OpenCue deployment. It’s written in Python and provides a thin layer over the OpenCue Python API, PyCue.

Cuebot is a utility that runs in the background on a workstation or server cluster and performs a variety of important OpenCue management tasks.

CueSubmit is a graphical user interface for configuring and launching rendering jobs to an OpenCue deployment.

A graphical user interface you run to monitor and manage jobs, layers, and frames.

A job which won’t run until the frames of another job are completed.

Facilities can be used to label and separate farm resources. This is generally done based on physical locations to help guide jobs to hosts in that location. Both jobs and allocations belong to a facility. Jobs submitted to a facility will only run on allocations within that same facility.

An individual command that’s contained in a layer.

A frame-to-frame dependency, where only the corresponding frames need to finish.

A machine that is running an instance of rqd. This machine will split up into procs to execute work.

A job is a collection of layers, which is sent as a script to the queue to be processed on remote cores.

The sub-jobs in an outline script job. Each layer contains a frame range and a command to execute.

A powerful tool for submitting jobs to the queue. You can can define an outline script to batch multiple job submissions into a single job, setting up dependencies and / or running in parallel. Outline scripts can submit almost any type of job to the cue, including Maya, Katana, or even shell commands.

A proc is a slot on a render host that has been carved out and isolated to execute a frame.

PyOutline is a Python library. It provides a Python interface to the job specification XML, allowing you to construct complex jobs with Python code instead of working directly with XML. CueSubmit uses PyOutline to construct its job submissions.

A queue is a render farm that processes a large number of render jobs according to defined priorities.

RQD is a client daemon that runs on all hosts that are doing work for an OpenCue deployment.

A service is a collection of resource requirements and tags that are associated with a layer. The service contains minimum and maximum thread requirements, minimum memory and gpu requirements, whether the jobs are threadable or not, and a list of tags. These attributes are inherited by layers submitted to that service by default. Services can be used to setup different requirements for different software jobs. For instance, a Maya render may need 6GB of memory vs a Nuke render may only need 2GB.

A show is a group of related work to be done. Jobs submitted to OpenCue exist within a show. Subscriptions list the available allocations to a given show.

When all the frames of the first job need to finish before the second job can begin.

A Subscription is an object that associates multiple allocations with a show. This drives what render hosts can do work for a show.

A string that can be assigned to a render host and a layer. Frames contained in a layer with a tag will only render on a host that also shares that tag. 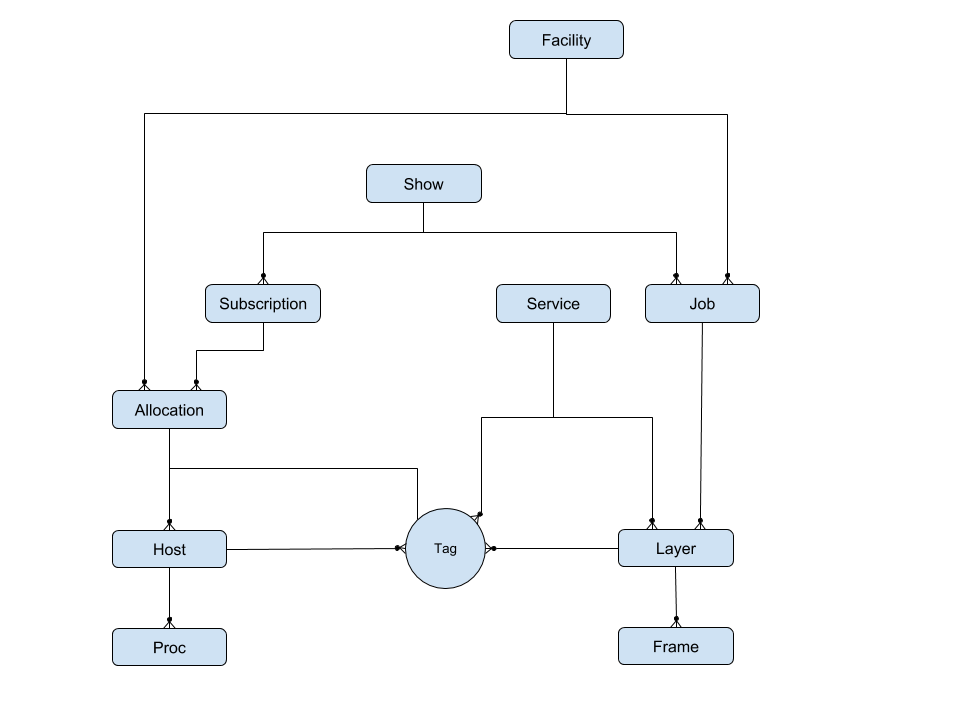 This diagram depicts the connections between the primary objects within OpenCue As you can see the majority of connections follow a one-to-many type of relationship. For example, a job can be connected to many layers. With the understanding that a frame can only run on a proc that shares the same tag and facility, you can walk this diagram to determine where these settings are coming from in your jobs.

Was this page helpful?

Glad to hear it! Please tell us how we can improve.

Sorry to hear that. Please tell us how we can improve.